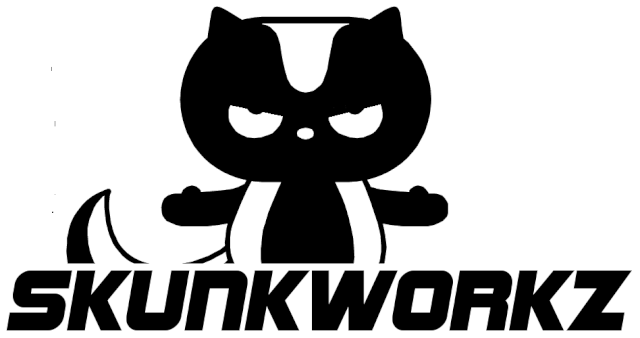 This is the carbing cage that went into it; 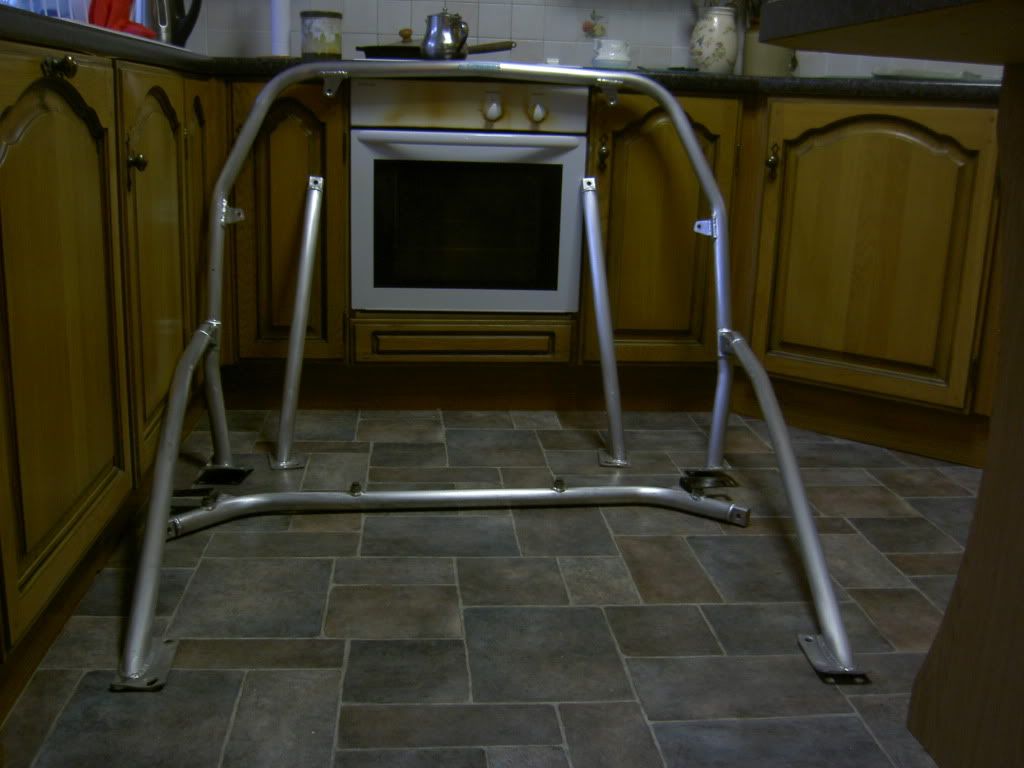 I also have uprated performance engine and diff mounts to be fitted, il get pics of them later, there in the boot of the car along with a 2 way diff il be fitting when I'm fitting the mounts

Got these recently too, vented indicators for the bumper, must just paint them black before I fit them, need as much cooling as I can get (it gets very hot in the engine bay) these mx5s run pretty hot anyway so with a turbo it gets even hotter, it's never overheated on me even with the hard driving and really hot temperatures in france but just want to keep it as cool as I can anyway 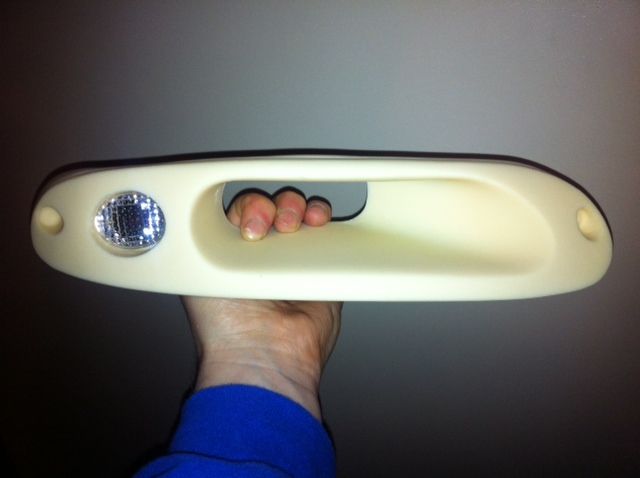 Thanks, it's getting there, a slow build but pretty interesting I think, can't wait to get it out on a track when it's finished, it's nctd and insured so i will be driving it on the road but not everyday, my RS is my everyday car. 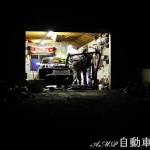 Here's some pics of a trackday I did before I got the turbo fitted, was surprised with it on the track, thought I was going to get imbarrassed without having much power but it did well on the track, the Coilovers and bigger brakes helped a lot plus since mondello isn't really a high speed track was able to hold a pretty good speed through all the corners, should be great fun with that little extra power now from the turbo so can't wait to get it out on track again 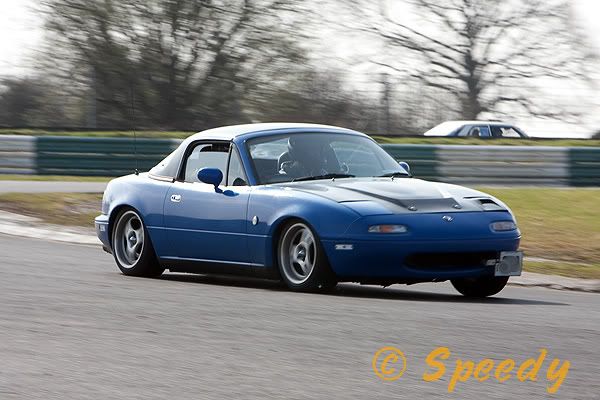 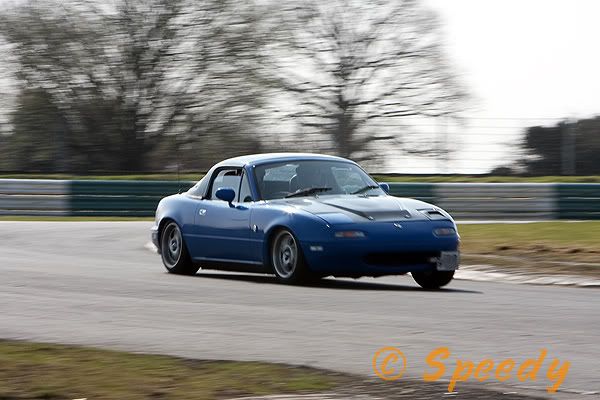 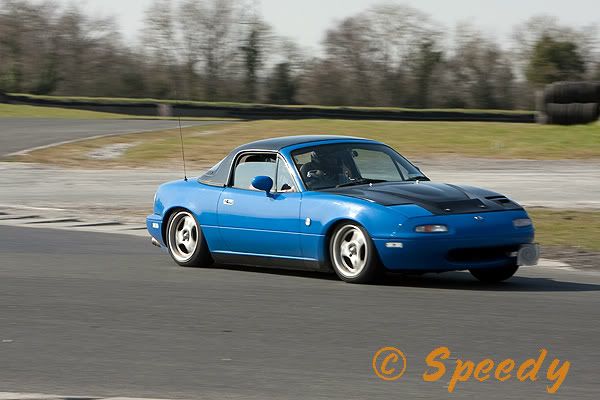 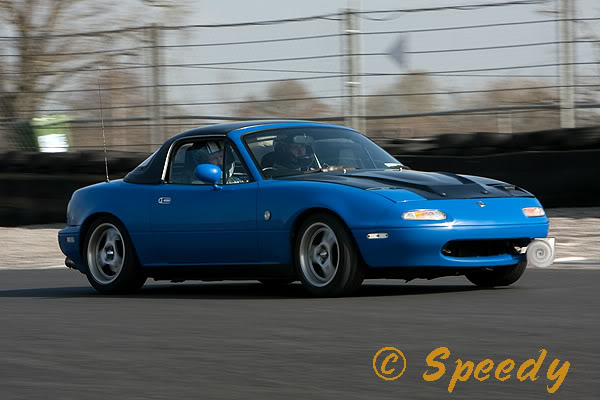 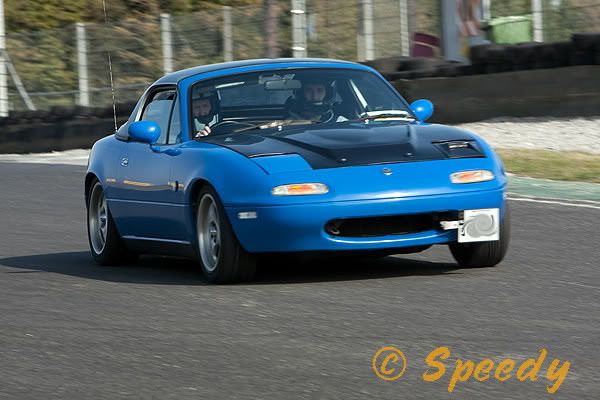 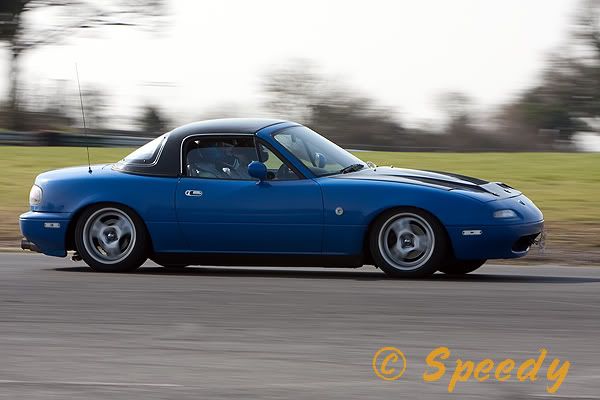 I bought these seats a year or two ago too but don't have them fitted as the car was away at the time, il get them fitted soon now with the car at home, their re amemiya seats originally from an rx7 I think so will need a little work to get them fitted plus the centers of them are pretty faded so il get that retrimmed 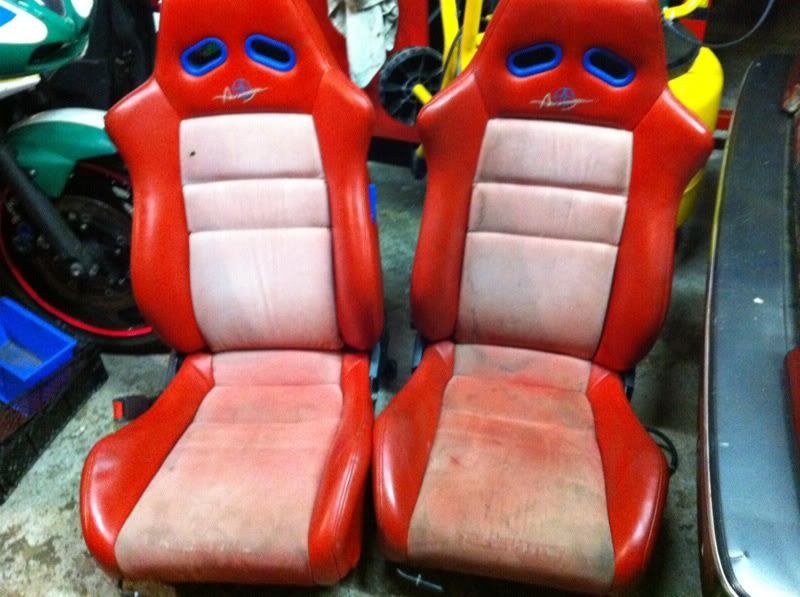 This is what I hope to do with the centers, their mazdaspeed seats (very rare and a lot of money) the re amemiya seats look very like them only for the centers so if I can get someone to retrim them like that I'd be delighted, their a sweet looking seat and should look unreal in the blue car 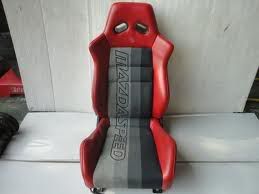 davep91 wrote:This is some build just rad the whole lot there
She's a credit to you sir

I sold my lightweight hardtop with perspex window a few months ago but before that I picked up another lightweight hardtop, the rubber seal around the Perspex window was a little tatty and the paint was very rough but it was all carbon on the inside so thought it was worth the money and would be nice cleaned up, found out after buying it that it was a Garage Hundred One hardtop, super rare and very light, consisting of mainly carbon with a very thin fiberglass outer skin and Perspex window, 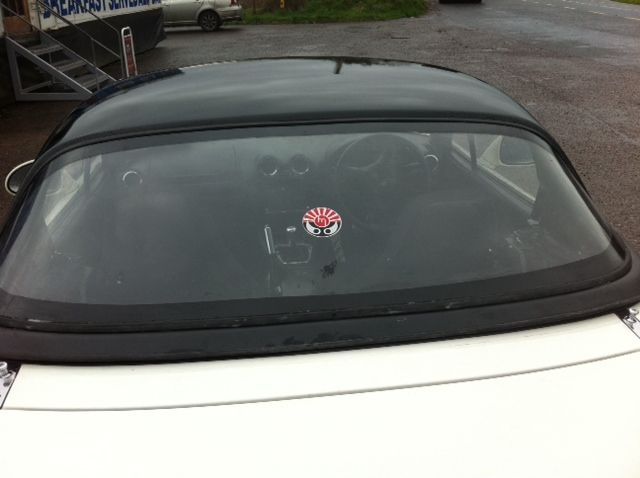 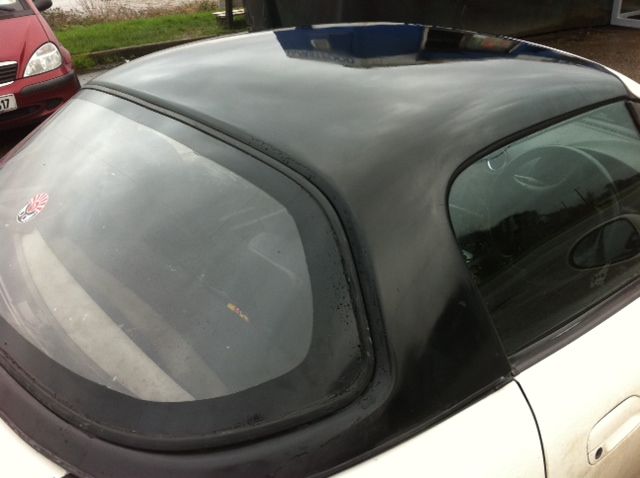 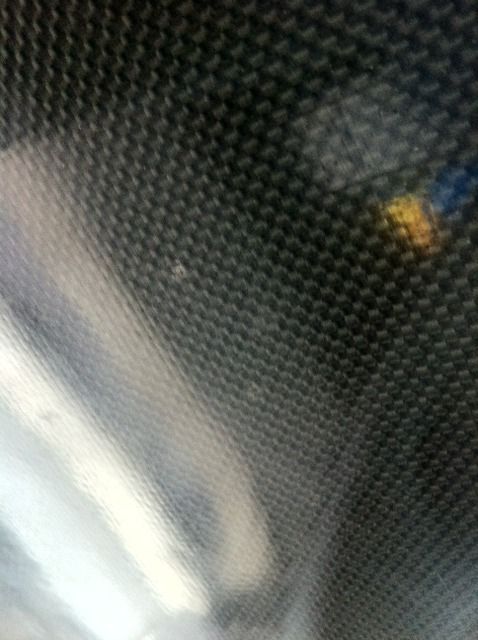 Over the next few months I'm going to try get this Perspex window for the hardtop, put in new window sealer and give it a fresh coat of black paint (there's no point in spraying it blue or white since its interchangeable between the two mx5s) hopefully il be able to get a good copy of the Garage Hundred One sticker for the new window made up though. 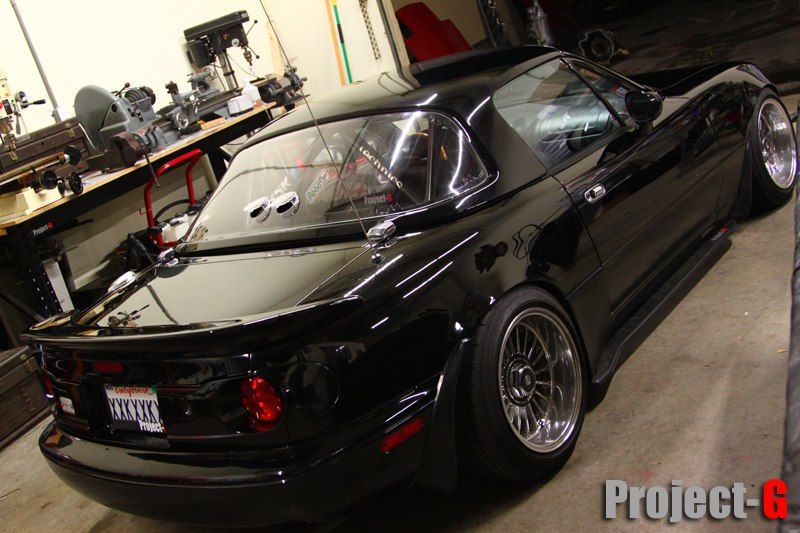 A small update on this, it's still in the garage at home but is nearly back together, that suspected leaking oil cooler coolent hose underneath the inlet manifold turned out to be a stub of a hose coming out the back of the engine where that hose would have been coming out (must only be on the 1.8s) it was burst so that was replaced and its all back together, it started ok but there's fuel leaking out from one of the injectors now, one of the seals was a little damaged taking them out or putting them back in so we'll try the seals off my spare mx5 injectors and if they don't work il get a new one some where. It's going to be abit of a rush getting it all back together and running perfect because I'm booked in for a trackday on the 22nd of February and also want to fit the performance engine and diff mounts, get some gauges finished and change the sump, hopefully we'll get it all done though

I just put a deposit on these wheels for the car, can't wait to get them on, will look sweet on it I think and not many people will have them on their mx5s 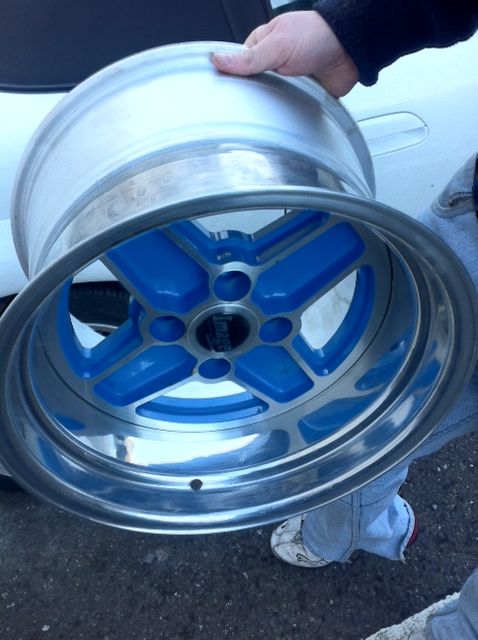 i want them too lol

they are gona look unreal on her

Thanks, not sure about the color, might change it but il see later

if the paint is perfect on them

them i wouldnt bother

they look cool that colour tho

Seen his in person when I was collecting my shiny bits them wheels will be savage on it dude!

Thanks Kenny, can't wait to see them fitted

My brother has been doing great work to this getting it ready for the trackday, his fixed loads of problems 2 supposedly professional garages couldn't fix. With everything tightened up perfect all around the engine bay unlike before the cam angle sensor needed fine adjustment to get the car ticking over ok and starting, my brother fixed this (it hadn't been ticking over right plus wasn't starting on loads of occasions, lost count of the amount of times I had to push start it, had the neighbors driven mad!). He fitted the performance engines mounts today and while taking out the old ones found that they had been mounted the wrong way around

we won't get a new sump on in time for Friday but his going to drill and tap a new one for me in the right position the weekend. The car feels a lot different then before, there isn't as much of a kick off the turbo but it seems more powerful and has better power all through the rev range instead of just a big kick around 4k plus it's staying a lot cooler then it was before. Can't wait for the trackday, the car feels awesome, fingers crossed it will hold up for the day

As well as doing the few bits above my brother also fitted EBC yellow stuff brake pads and an old OMP bucket seat I had lying around, I finally fitted my garage vary front splitter too and I put on the original blue bonnet (I won't put back on the vented garage vary one until its sanded back to the carbon and re lacquered). Last thing before the trackday is oil change and oil filter and a wash and we'll be ready to go 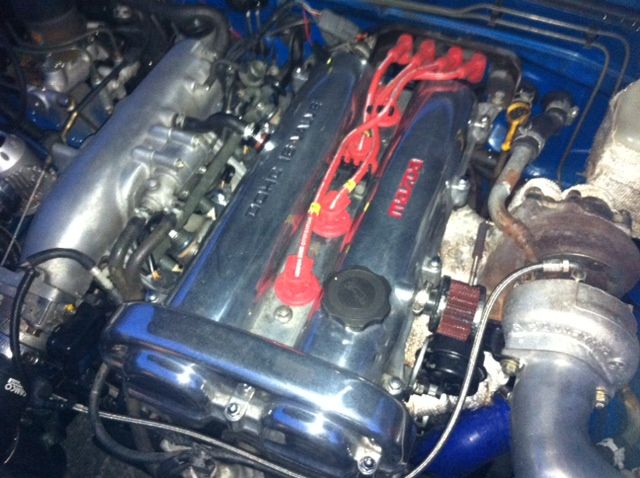 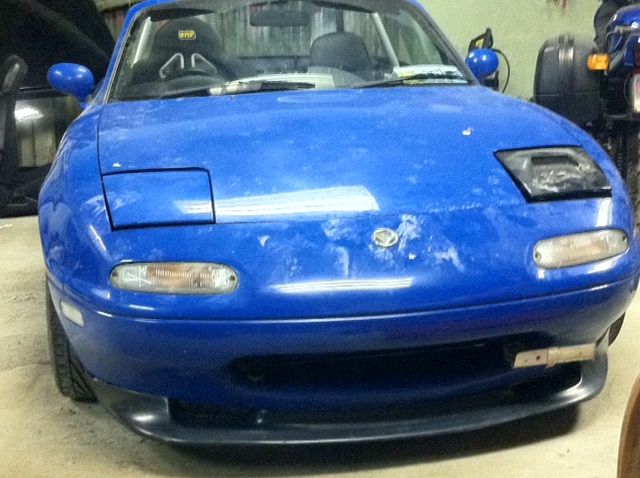 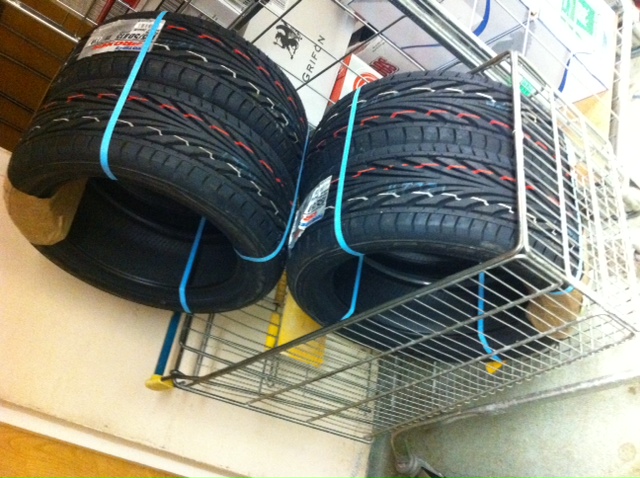